Honestly, one of my absolute favorite products for Sony at CES 2010 was the Sony Ericsson XPERIA X10. It’s a powerful device with a 1GHz Qualcomm Snapdragon QSD8250 processor, complete with a 4 inch capacitive touch display, 8.1 megapixel camera with LED flash and 8GB included MicroSD removable storage. However, the thing that truly stands out to me with the phone is display. It’s the type you just can’t stop looking at because it’s so lush and at four inches you can see so much. The who experience is pretty fluid 95% of the time, with occasional jitters here and there. Still, very impressive for an Android 1.6 build. We hope that it has an upgrade path to 2.1 sooner than later.

Regardless, there is no doubt in my mind that if you pulled this thing out in public it would get some attention. People were all over it at CES.

Here is a little extra review video showing off a little bit of Time Scape, Media Scape, and the dialing interface. We also briefly compare it to the iPhone 3G:

I have to reiterate the phone felt very natural in my hand, and even holding it up to my head wasn’t absurd. It’s really not that larger than an iPhone, but somehow has a larger screen and looks just bloody futuristic. I’ve owned an iPhone for quite a long time and I can honestly say this is the first device that makes me want to try something different. Designs like these totally blow away what Apple is doing right now. And Sony Ericsson is not the only person doing that now. I think a lot of the CE manufacturers are going to hurt Apple in 2010 because they are using advanced functionality such we found in the XPERIA X10, as it has Android, such a striking appearance, and embraces open standards (MicroSD, Mini USB, removable battery). Sony Ericsson could potentially ignite a turnaround if they continue to offer devices of this caliber. It’s just simply gorgeous. 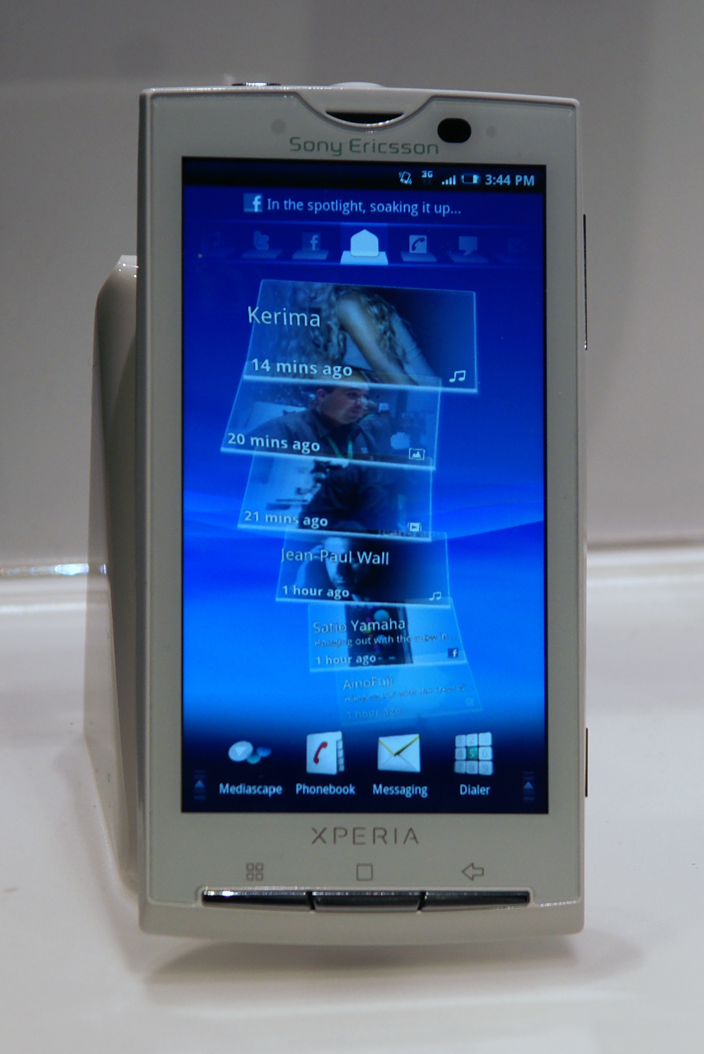 I have a hard time believing many of you will resist this, if you have the opportunity to get it. Don’t mind the cord/attachment to the back of the phone in the pics, it was part of the booth.